Sometimes, it seems like the internet is full of tedium — waiting for a page to load, juggling different passwords, and trying to find the perfect GIF image to describe your mood. But luckily, it’s also full of really cool nuggets, thanks to the clever developers who make it their mission to put the curiosity and fun back into our daily routines. What’s another name for those? Easter eggs.

Easter eggs are hidden gems, features, or moments of surprise buried within software and throughout the internet. They’re designed to catch you off guard and make you smile — if you can find them.

But why would you hide these fun, delightful gems? And since Easter eggs typically don’t add much functionally to the software or site, why bother taking the time to code them in? A few years ago, HubSpot’s VP of Marketing, Meghan Anderson, asked a few of our colleagues for their opinions on the matter. And while she found that you’ll get a different answer from every person you ask, most answers boil down to the same motive: “for the fun of it.”

“Adding an Easter egg can be a fun diversion when writing challenging code … and it’ll hopefully amuse some people, too.”

“Easter eggs are fun to build and fun to find, because they reward users that care enough to find and get excited about them. They create this feeling of being an insider with the application or company, which can be incredibly valuable in terms of brand loyalty and engagement.”

“I feel like Easter eggs are part of the ‘developer’ personality. These are very smart people who love solving puzzles, and the intricacies of their work isn’t ever fully appreciated by most of the customers using their product. So by hiding an Easter egg, they can reward the customers who do take that extra initiative to really dig in and appreciate the software — and what goes into making it.”

Sharing these gems feels a bit like revealing the secret to a magic trick. After all, half the fun surrounding Easter eggs comes from the hunt for them. So, if you like to be caught off guard, it’s completely okay to stop reading now. Instead, you might want to watch this video of three dogs playing. After all, we don’t want to leave you empty-handed.

10 of the Internet’s Best Easter Eggs

Easter egg hunting is a little easier if you’ve got a map. With some help from co-workers, Reddit, Little Big Details, Quora, and other sites, I’ve compiled a starter map for you, complete with some of the best hidden features out there.

Truth be told, I actually enjoy the occasional quiz that determines, say, which generation I belong to based on my favorite pizza toppings. It’s the type of content for which BuzzFeed has earned a reputation, though it does also feature some legitimate news items and narrative journalism.

But scrolling through BuzzFeed’s home page sometimes feels like falling through a bottomless well — except, there is an end. And if you make it there, you’re in for a little treat:

It’s the music video for the 1991 hit single “End of the Road,” by Boyz II Men. It’s linguistically fitting — after all, you have reached the end of the proverbial BuzzFeed road by making it all the way to the bottom of the homepage. Plus, it’s a particularly fun surprise for those of us with an affinity for 90s music.

It’s been a long time since Google was “just” a search engine. But for those who want to have a bit of fun with its search feature, you’re in luck — Google’s developers have a sense of humor.

To start, look at what happens when you enter the query, ““:

The word “blink” actually blinks in all of the search results. It’s a sneaky, cheap thrill for those of us who are easily amused.

Google’s antics hardly end there. And while it didn’t take long for this easter egg to become discovered (and widely talked about), it’s still a pretty cool online treat. For April Fool’s Day 2017, Google Maps allowed users to turn its maps platform into a game of Ms. PAC-MAN:

While the feature may have been intended as an April Fool’s joke, as of the following Monday, it was still present on Google Maps — and the top search results for “Google Maps Ms. PAC-MAN” mostly covered ways to remove it. Full disclosure: This marketer, personally, quite loves the feature, and plans to waste plenty of her free time on it.

Does this dinosaur look familiar? 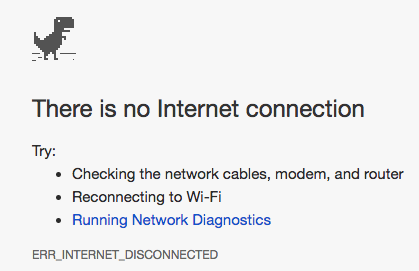 Chrome browser users might recognize him from a lack of internet connection. But now, there’s actually reason to rejoice when Chrome can’t connect. Even if you’re offline, when you land on that screen, watch what happens when you press the spacebar:

Well, I know what I’m doing next time the in-flight Wi-Fi isn’t working. And, good news for those who need more reason to procrastinate: Someone took the liberty to create the T-Rex Runner game page, so you can play any time. Plus, Android users can download the game here.

There are some pieces of pop culture that, it seems, will never fade away. Many of them fall into the realm of science fiction films, like the Star Wars franchise. These days, whenever a new film in the series is released, it seems like everyone wants to be a part of it.

That includes the music streaming app Spotify. Watch what happens to the play bar at the bottom when The Force Awakens soundtrack begins playing:

It turns into a famed lightsaber — the laser sword used by many Star Wars characters. May the force be with you, indeed.

Here’s a good one for those of us who are nostalgic for the earliest days of internet chat. In your Facebook language settings, there’s a bevy of options — everything from English to Svenska. And at first glance, it looks like Facebook seems to have done away with such non-sequiturs as “upside-down” and “pirate.” But those options are actually just masked as alternative “English” variations. Have a look:

And what’s not shown here is the search bar, which when set to “pirate” displays the text, “Scour fer scallywags ports ‘n’ various sundries.”

Also mixed into the global options is Leet, which is defined by Google as “an informal language or code used on the Internet, in which standard letters are often replaced by numerals or special characters.” 4w350m3 — that’s Leet for, “Awesome.”

If you’re familiar with the Muppets, chances are you’ve at least heard of the Swedish Chef character, who’s known to end his intro song with the words, “Bork, bork, bork!” Google has taken that phenomenon and incorporated it into its own language settings. Yes — “Bork, bork, bork!” is a language option. Here’s what Google’s homepage looks like after selecting that as your preferred language:

Feloong loocky? Excellent. Try your hand at Google’s other language options, which — like Facebook — include Pirate and Klingon.

Are you the type of person who loves the randomness of the internet more than anything else? If that’s the case, visit Black Acre Brewing’s website, and click “I am under 21.”

Um. Okay. If you’re not old enough to drink, you are old enough to watch He-Man sing the 1992 4 Non Blondes hit single “What’s Up?”

To some of us, there are fewer things more fun than online shopping. The only thing that might make it more entertaining might be watching the catalogue items come to life and interact with each other. In fact, the folks behind Dutch retail site HEMA had the same thought, and created a trick product page for that very purpose. Bump the mug, and watch the catastrophe that ensues:

I’ll admit it — I’ve never quite bothered with Google’s “I’m Feeling Lucky” button below the search bar because, well, I always seem to forget that it’s there. But it seems that I’ve been missing out on a little trick. If you hover your mouse over the button — without typing anything into the search box first — the text will spin like a slot machine into other options, like “I’m Feeling Hungry,” or “I’m Feeling Stellar.” Clicking on one will bring you to a topic-specific page:

For the sake of my productivity — and your own — I’ll stop there. But that’s hardly a comprehensive list of the internet’s Easter eggs. There are countless more out there to find, so we’ll leave the rest of the hunt up to you. Let the search begin.

What are some of the best internet Easter eggs you’ve found? Let us know in the comments.

Editor’s Note: This post was originally published in November 2013 and has been updated for accuracy and comprehensiveness.