It was quite a day for Recode — a digital tech news site owned by Vox — to kick off its annual Code Commerce event.

The morning’s headlines were crowded. Marc and Lynne Benioff (the former of whom is CEO of Salesforce) announced plans to purchase Time Magazine. The Adbusters Media Foundation unveiled its plans for #OccupySiliconValley, a day of efforts to take down Big Tech. And Amazon — perhaps the biggest name in (online) retail, which is at the core of Code Commerce — had its own news.

First, the ecommerce giant said it would be looking into allegations that some of its employees were involved in trade deals with independent merchants selling on the site. The way it worked, the story goes, is that in exchange for internal sales data and the deletion of negative reviews, these employees would receive a financial reward ranging anywhere between $80 and $2,000.

It may not have been a coincidence, then, that Amazon announced only hours later that it would launch Storefronts: “a new store for customers to shop exclusively from U.S. small and medium-sized businesses selling on Amazon.”

Storefronts, Amazon says, will make efforts to highlight small businesses — by highlighting a “Storefront of the Week”: a small U.S. business that Amazon features through a video that talks about its products or services, and the people behind them.

Remember that for later — because people, it turns out, are key to this story.

Putting a Face to a Purchase

Code Commerce kicked things off with a talk from NYU Stern Marketing Professor Scott Galloway, who — if the name doesn’t ring a bell — is the same guy who predicted that Amazon would acquire Whole Foods in May 2017, a good three months before it was announced. (For the record, he predicted today that Amazon’s HQ2 location will be somewhere in the D.C. metropolitan area.)

He was blunt. “”It’s impossible to compete with Amazon,” he said.

This observation isn’t unfounded. After all, just have a look at its market capitalization figures: 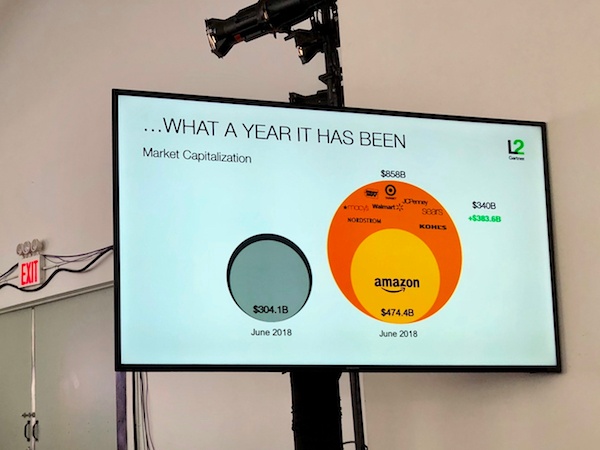 That’s a visual representation of how much, in terms of the value of other retailers, Amazon’s market capitalization has grown over the past year. Simply put — its absorbed the value of Target, Best Buy, Nordstrom, Macy’s, and a handful of others.

The perception that it’s “impossible to compete with Amazon” is quite possibly part of the drive behind Storefronts — as The Verge puts it, the company is “trying to convince you that it isn’t putting small businesses out of work.”

But maybe there’s some truth to it — that Amazon isn’t really trying to put an end to small businesses. As glib as Galloway’s remarks may be — he didn’t paint a picture of Amazon as a mortal enemy to smaller, local retailers. He even pointed out examples of some retailers who have continued to succeed not just among Amazon’s seeming overtaking of commerce, but also, among rumors of artificial intelligence (AI) replacing the jobs of store employees in the not-so-distant future.

So what does it take to be successful as the mom and pop business alongside the likes of Amazon? Here’s a brick-and-mortar success secret that Galloway let us in on: it boils down to making big investments in technology, keeping an eye on AI, and “organic intelligence.”

That last phrase refers to the people working in the store — the ones who many speculate could be replaced by AI. Amazon has been dipping its toe into AI-operated stores with its cashier-less Go stores.

In contrast, Galloway floated the example of Sephora: a store where passionate associates — cast members, as the company calls them — seem to show genuine enthusiasm, as he put it, “about helping a 52-year-old with a tea extract.”

“People go to stores for people, not products,” he continued — and replicating that with AI might not only be a tall order, but ultimately detrimental to retailers.

⁦@profgalloway⁩ tells #codecommerce people go to stores for people, not products, warns retailers not to see tech as a way to replace humans in stores pic.twitter.com/vUUHDp7YQA

And considering that many of the sellers using Amazon’s platform are small-to-midsize business (SMBs), featuring the humans behind the online purchases could be another driver behind Storefronts.

“It makes sense that Amazon would want to spotlight small businesses on the platform. Every indication we have shows that trust is at an all-time low when it comes to purchase behavior and more so, customers will pay a premium for a company they know, trust and respect,” said HubSpot VP of Marketing Meghan Keaney Anderson. “Putting a face to the thousands of SMBs already on Amazon not only gives buyers that outlet, it arguably makes Amazon feel like a more familiar and trustworthy place.”

Shopify CEO Toby Lütke, who claims to have started his business to make entrepreneurship accessible to everyone, had this to say about the ecommerce giant’s newest venture: It “feels like a trap to me.”

Others assert that Amazon simply can’t replicate the unique benefits of shopping from a smaller business. For one, the sense of community.

It’s something that HubSpot CMO Kipp Bodnar pointed to earlier this year when he wrote about building an ecommerce business. Building a community that rallies around a certain product, he said, is “something Amazon simply can’t do for every single category they occupy.”

“Samsonite could recreate our product overnight,” she said. “But our brand and community, that’s what they can’t build overnight.”

“You will never have control of the full buying experience selling your products on Amazon, but you will get reach,” Keaney Anderson pointed out. And “the impact of that reach could be an absolute game changer for your business.”

However, she also pointed out that that sometimes reach can be achieved without an intermediary.

“You don’t have to lose control to gain reach,” she said. “Companies like Glossier and The Cactus Store have achieved remarkable traction and loyalty because of their decision to sell direct to consumer and have creative control over the entire customer experience.”

So, it’s not necessarily an either-or situation. For some retailers, a channel like Amazon might make sense — but it’s not the end-all, be-all of raising brand awareness.

“If you’re already selling through a marketplace or retail outlets for the sake of reach, it makes complete sense to also lean into Amazon – particularly now that they’re putting such a spotlight on SMBs,” Keaney Anderson said. “But know that it’s not the only way to grow.”

We’ll be back for day two of Code Commerce tomorrow — where we’ll share more experiences, insights, and takeaways.

Facebook Shops: What Is It and How Brands Can Use It